Covid vaccinations turn off a crucial part of your immune system 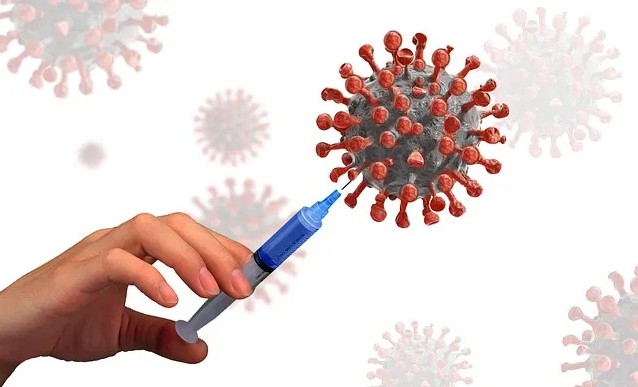 Covid vaccinations switch off a crucial part of your immune system, so that you can become critically ill or even die after (re)infection with the corona virus.

Dr. Sherri Tenpenny** was director of the emergency department of an American hospital for 12 years. She then began to focus on integrative medicine, now runs a major nationwide center for it, and became one of the world's best-known and in-demand anti-vaccine speakers. The author of several books is by no means the first person with a credible medical background to warn that the Covid-19 vaccinations could have dire consequences. According to Tenpenny, the big blow will come in about 4 to 14 months, and huge numbers of people could become critically ill and even die.

(Caution: As with Dr. Merrit (article January 31), who assumes that the SARS-CoV-2 virus is a bioweapon escaped from a lab in Wuhan, Dr. Tenpenny's vehement statements about the consequences of the Covid-19 vaccines for consideration and discussion only, and not as already established irrefutable facts. As the number of scientists, doctors and other experts warning against these vaccinations and the associated political policy ('Great Reset'), is steadily increasing. It cannot be ruled out in advance that these are more than just a few wild theories, as history is laced with conspiracies that - certainly in retrospect - turned out to be the truth. partially, then an unprecedented number of human lives are at stake.)

Tenpenny’s interest in vaccines arose at the beginning of this century when she was confronted at a conference in Washington with critical doctors and scientists and numerous stories from parents whose children had suffered serious health damage after being vaccinated. She asked the official CDC documents justifying vaccinations and was shocked. "I thought, is this it? Is an entire industry based on this poorly written "bad science" paper? "

** Dr. Tenpenny even has its own page on Wikipedia (certainly turned into one big unreliable propaganda tool for the establishment in recent years). It states that her claim that vaccines can cause autism has been "ditched." That is disinformation, see, among other things, our article of 20-01-2019: Recognized pro-vaccine expert turns around: Vaccines can indeed cause autism.

The antibody response to Covid vaccines

The antibody response these vaccines cause can be fatal.
After 40,000 hours of study, two books and hundreds of articles translated into some 14 languages, she dares to say "I am pretty much the one what to be aware of regarding problems associated with vaccines… When Covid showed up in March (2020), I of course delved deeply into that. I am very keen to let people know what is in these vaccines and why you should refuse them anyway. These vaccines can be deadly."

The antibody response these vaccines cause can be fatal. It will take about 4 to maybe 14 months before we fully see the devastation of what will happen to people vaccinated with this vaccine.

Tenpenny: And it should. We are at a crucial moment in time on many different levels for all of humanity. Gone are the days of holding hands and being careful, not wanting to hurt anyone, being as nice as possible to the snowflakes. That simply is no longer possible.

Already a huge number of back-reactions to Covid vaccination

Senum points to the large numbers of reports from people, as well as doctors and nurses, who shortly after being vaccinated with a Covid vaccine went down, became critically ill, and sometimes even died. "That's just the beginning," continues Tenpenny. "After 30 days, we already have more than 40,000 reported cases of counter-reactions in the VAERS database (estimates have been for years that only 1% to 10% of the actual number ends up in this database - X.). More than 3,100 people have already gone into anaphylactic shock, and more than 5,000 with neurological reactions."

‘In 30 days! Can you think of any other product that has ever caused side effects in 40,000 people in 30 days? And not only is it still on the market, but it is being pushed through, complete with actors getting paid to say how great it is to take this vaccine. Some people are paid $ 500 just to get vaccinated.’

In videos you can see doctors and nurses cheering that they are finally getting the vaccine, but in a few months they will not be so happy when they have their neuropathic and cardiological problems, their autoimmune reactions, and they die of a blood disorder. But we will never see images of those people.

Senum then cites a poignant example from a hospital, where a doctor congratulates a woman who had anaphylactic shock 40 minutes after being vaccinated, saying that he was unable to move an arm himself for 36 hours because of the vaccine. She is baffled that people seem to be okay with all of this, and has accepted that the industry itself has announced that many people will get backlash, and people will die. So, as I did more often last year, Senum compares getting this vaccine to playing a game of Russian roulette, which will continue once you have been injected.

Trojan Horse mechanism
Dr. Tenpenny cites the often discussed experimental Pfizer/BioNTech "nano" mRNA vaccine on this site, with ingredients that have never been used in humans before and the tests of which were carried out in a hurry last year. Recently it became clear again that the test results have been extremely manipulated to market this vaccine, which essentially amounts to genetic engineering, as "successful" to the population.

The mRNA component in the Pfizer vaccine creates an "Antibody Dependent Enhancement" (A.D.E.) response, triggering your cells to produce the Spike protein from the SARS-CoV-2 virus. Your immune system will then produce antibodies. "This Spike protein has been shown to cause damage in three ways," the doctor continues. The moment antibodies attach to an infected cell, the mRNA can come off and continue to replicate indefinitely in your body, with completely unknown and unpredictable consequences.

As if you have an "on" button, but no "off" button. They even came up with a name for this: the Trojan Horse mechanism, because… this part of the virus can even penetrate into other parts of your DNA. ”The second mechanism that can be triggered is that the antibodies against that Spike protein make your lungs penetrate, and there can cause Diffuse Alveolar Damage (DAD), ie damage to the lung cells with which you breathe. They are then broken down and destroyed. These antibodies can also cause bleeding in your lungs."

Vaccine switches off crucial part of the immune system

The third, even more sinister aspect is that the Spike protein antibody can attack your macrophages (white blood cells). There are two types of this. Type 1 cleans up all kinds of junk (from bacteria, etc.). For example, if you get pneumonia, Type 1 causes a violent inflammatory response (cytokines, etc.). Type 2 ensures that the inflammatory response is slowed down as soon as you start to recover, and repairs the damage. So these two keep each other in balance.

But the Spike protein antibody - and this is the full purpose of these vaccines - kills your Type-2 macrophages. It binds to them and deactivates them. All animals dead in the test stages had lungs full of these Type-1 macrophages, but ZERO with Type-2. What did they find out? That animals that did NOT have that Spike protein antibody started to recover after just two days.

Senum: And that's why you say people will start dying in one to a year and a half?

Yes, Tenpenny answers. Then she explains the process that we have described before, namely that (re)exposure to the virus AFTER vaccination can trigger this fatal process. The vaccine has expertly deactivated a crucial part of your immune system through the methods just described. If the coronavirus does arrive, or again, it could mean the end of the story for many. Those who do survive can end up with lifelong autoimmune diseases, which, incidentally, can only occur after 5, 10 or 20 years.

There are 36 known coronaviruses, 7 of which can infect humans. They have been around for 60 years, so they were there long before Covid came into existence. But now that coronavirus (thanks to the vaccines) is going to kill people. We do not see that immediately, although it does in some people because of other ingredients in these vaccines. Like that doctor who immediately got ITP, an autoimmune disease that attacks your red blood cells. You can die from that.

Many more people get sick between 42 days and 1 year.

Many more people only become terribly ill after 42 days and about a year, and develop all kinds of autoimmune diseases. And what are those crazy doctors going to do who now say "great that you got your vaccine"? What will they say then? That it is a mutation! And that you therefore have to get an extra dose of the vaccine! Because now you already need three or four doses instead of one or two. These stupid doctors do not take the time to find out. "And that is really not difficult, as anyone can read about this in numerous published scientific studies on this. She has placed all kinds of hyperlinks and references to these studies on her blog at vaxxter.com.

Because this article would otherwise become too long, we will show the remaining 40 minutes of the interview point by point:

Dr. Tenpenny’s conclusion (from 37 min. and 55 min.): 'Vaccines have always been a method of mass destruction then and now, a method for depopulation, a method to get as many 'lifelong customers' of medicines as possible ... People are now starting to understand that this really is a controlled weapon to make you chronically ill, to kill you, or to submit to the transhuman movement forever.'

These are particularly strong statements from someone with decades of medical experience, including 12 years as director of a hospital's emergency department. Whether she is right with her pitch-black predictions is impossible to say at the moment. Still, anyone seriously considering getting injected with these experimental vaccines should seriously question whether their health is worth the gamble that Dr. Tenpenny, and recently Dr. Lee Merritt, had an even more impressive medical career, nothing but nonsense, as the mainstream systems order claims.