Tattoo and the Christian 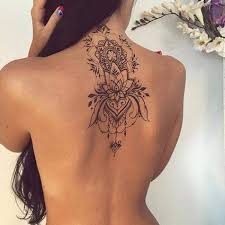 Tattoos are going to give us divine power?

A tattoo is the permanent application of ink under the skin. This is usually done with a sharp needle.
In tattooing, ink is placed under the top layer of skin using a special tattoo needle. With modern tattoo machines, this needle goes up and down about 80 to 150 times per second. In this way, a tattoo can be placed relatively quickly.

The skin is made up of two different layers, which in turn consist of different tissues. The outermost layer is called the epidermis and the layer below it is called the dermis. The outer layer consists of dead, heavily flattened cells that provide extra protection. The tattoo is placed under this layer of skin that is difficult to penetrate.
When the ink hits the dermis, something crazy happens. Your body is shocked by the unknown substance and really wants to get rid of it as much as possible right away. The pigment particles are obviously too large to be removed by the “body's own cleaning cells”.
To still 'protect' you, the dermis encapsulates the ink.
This protective reaction literally creates paintballs, which can do no more damage and so the colors stay beautiful and permanent in your skin.

Why is a tattoo permanent?

The damage that has arisen in the top layer of skin is slowly repaired by the body. Any ink that ended up on the top layer of skin also disappears. However, the ink in the lower layer of the skin cannot be removed by the body's defense system because the ink particles are too large for that. As a result, the ink stays in place under the skin, making the image permanently visible.

30% of the color inks tested contain azo dyes, from which aromatic amines can be formed, and 41% of the black inks contain PAHs. These inks can release carcinogens. If these substances are released into the body, the risk of cancer increases.

Does the tattoo affect your blood?

Some bleeding, ink, and tattoo exudate is normal for the first two to three days. But: if this takes much longer than three days (your tattoo continues to bleed and you actually lose a lot of blood), call your artist or doctor.

How does tattooing affect your body?

When the ink hits the dermis, something crazy happens. ... Your body protects you from tattoo ink and repairs your wound. This can make you feel a little sick. Your tattoo might get a little thicker and redder.

Tattooing is often a scream to be seen. A cry for attention. Often because of an inferiority complex.

Does the tattoo have a demonic (idol) relationship?

Maori tattoos are very sacred. Both the person applyinging the tattoos and the person getting the tattoos cannot eat with their hands or talk to other people during this process. This already indicates the demonic (idol) relationship.


Tattoos and Japanese Yakuza are inextricably linked. The Yakuza are the Japanese mafia and their tattoos are world famous. The colorful bodies that cover the entire body are beautiful, but at the same time they have a dark meaning.
Originally, in Japan, tattoos were used to punish criminals and ensure that they could never enter society again. The Yakuza got tattoos as a proud expression of status. Yakuza tattoos are handmade. The movement, Irezumi, is very slow and very painful. A steel or bamboo needle is dipped into the ink and then into the skin. Having this tattoo therefore shows courage and perseverance. Tattooing your entire body is, of course, also an expensive endeavor, so tattoos are also a status symbol of a Yakuza's success.
On Yakuza tattoos, you often see various symbols. The best known is probably the koi carp. This symbolizes strength and courage.

Sometimes tattoos are deliberately placed at special pressure points on the body. The tattoo will then have an effect similar to acupuncture.

The disadvantages of a tattoo

Can you remove a tattoo?

Tattoo removal with surgery
Smaller tattoos (up to about 2 cm wide) can be removed in one or two surgeries. A surgeon will give you a local anesthetic, cut off a piece of skin, and then stitch it up. Healing takes about 3-6 weeks. The advantage over laser treatment is that you can quickly get rid of your tattoo with an operation, but the disadvantage is that you have a scar after the operation.

Removê-lo você mesmo é perigoso
Remove your tattoo yourself with a cream, lemon or even salt: you will find the craziest DIY treatments online. These do-it-yourself treatments claim to be quick, effective, and inexpensive. But what is often not mentioned is that these types of treatments carry a lot of risks and are also not as effective as they claim. Most popular DIY treatments to remove your tattoo are dangerous.
Remove tattoo with lemon
Another do-it-yourself option to remove your tattoo is to use a lemon. However, lemon and other citrus fruits are not always good for the skin. In people with sensitive skin, lemon can irritate the skin. Also, applying lemon juice to the skin can cause phytophotodermatitis. This is an allergic reaction to contact with plants in combination with sunlight (UVA). Lemon can also dry out the skin. So it is not ideal.

Why not a tattoo for a Christian?

Conclusion: It should be clear from all the above that tattooing is not allowed for Christians!

But as a Christian I have a tattoo, now what?

First, confess your sin and ask for forgiveness.
Second, cover your tattoo (which is mandatory with some companies) so that other people can't see your tattoo. Third, remove your tattoo. There was an unbeliever who had tattoos on his body, including on his face. After he got a child, he found it inappropriate and removed the tattoos, starting with his face. THEREAFTER he came to believe in Jesus.

What is the responsibility of the church, the pastor, in relation to the tattoo?

The church has full responsibility to the Lord Jesus Christ. Every pastor, Sunday school teacher, youth leader must teach all about tattooing and what the Bible says about it.
If a church member has a tattoo, the member should be asked not to show it and cover it up. If the Christian refuses, access to the church must be denied.