What is the Holy Supper and who may one participate? Sermon 7 Wilfred

The supper is a common use of the supper closed by the Holy Supper as instituted by Jesus on the evening before His crucifixion and death. The Holy Supper is actually celebrated incorrectly in most churches and only with a piece of bread and a cup of grape juice. In this sermon I want to deal with what the Holy Supper really entails and how it should be celebrated.
For the correct understanding we must go look in Luke 22:7-13

Then came the day of Unleavened Bread, on which the Passover lamb had to be sacrificed. So Jesus sent Peter and John, saying, "Go and prepare the Passover for us, that we may eat it." They said to him, "Where will you have us prepare it?" He said to them, "Behold, when you have entered the city, a man carrying a jar of water will meet you; follow him into the house which he enters, and tell the householder, 'The Teacher says to you, Where is the guest room, where I am to eat the Passover with my disciples?' And he will show you a large upper room furnished; there make ready." And they went, and found it as he had told them; and they prepared the Passover..

Note the last words: THEY PREPARED THE PASSOVER.

What is the Passover?

The Passover is the institution of the liberation memorial of the Israeli people from Egypt. The people were under slavery in Egypt for 400 years and the Pharaoh refused the Israeli people to bring sacrifices to their God in the desert. Nine plagues had already preceded it, but Pharaoh remained stubborn and God announced the tenth plague: the death of every first-born human and animal. That was true for both the Israelite and the Egyptian. God command that a lamb without spot and completely intact should be slaughtered (Hebrews 9:22, Without the shedding of blood there is no forgiveness of sins) and the blood of the lamb should be put at the doorpost and the lintel, we read in Exodus 12:3-10, 12-13 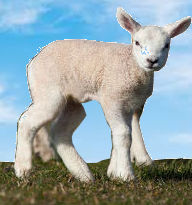 First of all, the one-year-old piece of flock must be slaughtered, the blood has to bring forgiveness, and the perfect LAMB is the Lord Jesus Christ, and this blood has to be put at both the doorposts and the lintel. ONLY then the death angel will pass that house and not kill the firstborn.
The WHOLE lamb has to be eaten that night. So there must be enough people in the house to eat the whole lamb. Unleavened bread, as a symbol of purity; and bitter herbs, as a symbol of the horrors of captivity.

Striking blood at the doorposts and lintel, duration 3:33 min. (No sound)

How should the Holy Supper be celebrated?

Luke 22:13 concludes with: THEY PREPARED THE PASSOVER. What did they prepare? The Passover consisting of the lamb to be slaughtered, roasted on the fire, making unleavened bread with bitter herbs. The blood had to be put on both doorposts and the lintel. And after this preparation, Jesus ate this meal with His twelve disciples. This is what is missing in most church at the Holy Supper, it is NOT preceded by the joint meal. We read in 1 Corinthians 11:20-29 that this celebration is with a meal

20When you meet together, it is not the Lord's supper that you eat. 21 For in eating, each one goes ahead with his own meal, and one is hungry and another is drunk. 22 What! Do you not have houses to eat and drink in? Or do you despise the church of God and humiliate those who have nothing? What shall I say to you? Shall I commend you in this? No, I will not. 23 For I received from the Lord what I also delivered to you, that the Lord Jesus on the night when he was betrayed took bread, 24 and when he had given thanks, he broke it, and said, "This is my body which is for you. Do this in remembrance of me." 25 In the same way also the cup, after supper, saying, "This cup is the new covenant in my blood. Do this, as often as you drink it, in remembrance of me." 26 For as often as you eat this bread and drink the cup, you proclaim the Lord's death until he comes. 27 Whoever, therefore, eats the bread or drinks the cup of the Lord in an unworthy manner will be guilty of profaning the body and blood of the Lord. 28 Let a man examine himself, and so eat of the bread and drink of the cup. 29 For any one who eats and drinks without discerning the body eats and drinks judgment upon himself.

From the above verses it is clear that they did not waiting for each other to use the meal, so that the last ones found a table that was (almost) empty. It is not clear whether the entire slaughtered lamb had already been completely eaten. But it is clear that the sacred supper celebration preceded the use of the common meal.

The institution of the Holy Supper

So let us go back the night before the crucifixion and death of Jesus. The Passover meal has been consumed and Jesus is now speaking in Matthew 26:26-29

26Now as they were eating, Jesus took bread, and blessed, and broke it, and gave it to the disciples and said, "Take, eat; this is my body." 27 And he took a cup, and when he had given thanks he gave it to them, saying, "Drink of it, all of you; 28 for this is my blood of the covenant, which is poured out for many for the forgiveness of sins. 29 I tell you I shall not drink again of this fruit of the vine until that day when I drink it new with you in my Father's kingdom."

Eating and drinking the vine is what one is used to call the Holy Supper. Pieces of bread are circulated in the churches and a cup with grape juice. However, the celebration of the Passover does not happen. Jesus is the slaughtered lamb, the perfect Lamb, because of the slaughter of the lamb, the blood was needed for putting on both doorposts and lintel. Without the shedding of blood there is no forgiveness of sins in Hebrews 9:22. It is Jesus who shed His blood at the cross of Calvary. When the soldier stuck his spear in the side of Jesus, BLOOD and water came out. The blood was applied to the BOTH DOORPOSTS AND LINTEL. The person who accepts Jesus as his or her Savior must apply the blood of Jesus FULLY to his or her body, mind and soul. If there is a part left behind, a part that adheres to the world, no complete control of the Holy Spirit, then one does NOT die completely of himself or herself. The instructions concerning the Passover were perfectly clear. One must FULLY apply the Passover in the Christian life. The disciples were pressed to the facts while eating the slaughtered lamb. And possibly the eating of the Passover lasted 1 to 2 hours. A conscienseness of sin!
Jesus takes the bread and breaks it into pieces so that each of the 12 disciples (= all present) gets his share, there is bread for everyone. The body of Jesus was crucified. His death, His body is SUFFICIENT for all believers from His life on earth to all believers today and in the future. For anyone who wants to believe in Jesus Christ as Savior from his or her sins, the sacrifice made at the Cross is sufficient. There is no exclusion, there is a lack of bread. Jesus broke the bread and fed the crowd of 4,000 and 5,000 men, and there was surplus. No matter how great your sin may be, the sacrifice of Jesus Christ is sufficient.
Then Jesus took the cup and let the cup go around so that every disciple could drink from it. Considering the time of the Passover (the heat), it was probably wine, because grape juice soon fermented. But there is nothing wrong with using grape juice in connection with possible alcohol addicts in the church. And because of the AIDs problems there is nothing against using separate cups. Drinking the vine is the red color of the blood which reminds that without shedding of blood there is no forgiveness of sin.

Who may participate in the Holy Supper?

The children of believing man and/or woman are sanctified from birth. So the powers of darkness have no right to them. Every time the child is given bread and wine, it is a declaration to the powers of darkness, hands off, this child belongs to Jesus Christ.
Hopefully this preaching has made it clear to you what the sacrament means, how we should celebrate it and for whom it is intended. May God bless you richly.